For the second year running, LASALLE partnered with the Info-communications Media Development Authority (IMDA) to run WritersLab, a first-of-its-kind intensive scriptwriting programme for Singapore writers. As part of the Story Lab initiative led by IMDA, WritersLab aimed to cultivate storytelling as a key capability in an evolving and competitive media landscape.

Through WritersLab, participants sharpened their writing skills and received guidance from visiting international experts. The programme culminated in a pitching and networking session, where participants pitched their completed scripts for production on Mediacorp's Toggle platform.

The trainers for WritersLab 2018 are as follows:

He was Programme Leader for MA in Television and Radio Scriptwriting at the University of Salford from 1996-2017 and Programme Leader for MA in Film Screenwriting at the University of Salford/ Tampere University of Applied Sciences, Finland, from 2007–2014. A project developed on the MA in Film Screenwriting and written by Anna Heinämaa, The Fencer (Miekkailija), was nominated for a Golden Globe award as Best Foreign Language Film in 2016. It was also shortlisted as Best Foreign Language Film at the Academy Awards in the same year. In 2004 Colin produced Joe Strick's Lysistrata which was performed at the National Theatre, London.

His most recent writing project, Jenie, Huis Clos Productions/True Liberty Films, will be filmed in France in October 2018.

Ken Kwek is an award-winning screenwriter, director and playwright. His full-length plays include Apocalypse: LIVE! (W!ld Rice, 2008) and The Composer (Spare Room, 2009). His screenwriting credits include The Blue Mansion (2009), Kidnapper (2010), It's A Great Great World (2011) and Trafficker (2013). His directing credits include the satirical short film anthology Sex.Violence.FamilyValues (2013) and the full- length comedy thriller UNLUCKY PLAZA, which premiered at the Toronto International Film Festival 2014 and won Best Director at the Tehran Jasmine Film Festival 2015. His first children's novel Timothy & the Phubbers was published in April 2018.

Jaya Rathakrishnan is a Singaporean bilingual screenwriter and lyricist for television programmes. She has written several screenplays for television dramas including Vettai, Kshatriyan, Nijangal, Janani d/o Madhavan and BRA. Jaya is also the recipient of the Kannadasan Award (2015) from the Singapore Tamil Writers Association.

Download writers' bios and loglines of the scripts which have been developed through the programme. 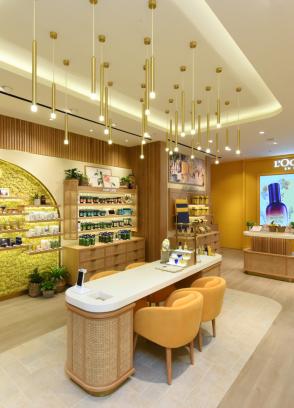 Designing a flagship boutique in collaboration with L’OCCITANE