Before the COVID-19 pandemic redefined the boundaries of a classroom, LASALLE had already begun to think beyond the physical trappings of an educational space.

“It is how the studio culture of the school becomes a four-dimensional space, one infused with digital face-to-face interactivity and drawing on myriad virtual, live-streamed and recording possibilities. The "classroom" operates within a space and outside of a space.”

In this photo essay, we take a peek into the redefined classrooms of the Faculty of Performing Arts in the time of a pandemic, and bear witness to how the show must go on.

Diploma in Dance students participated in a remote learning workshop with Studio Wayne McGregor. Organised as part of the Esplanade’s da:ns festival, they learnt repertoire from the award-winning choreographer’s Living Archive work though a screen. BA(Hons) Musical Theatre students honed their acting skills in a class conducted by Professor Michael Earley, Dean of LASALLE’s Faculty of Performing Arts, who took the students through rigorous sessions that focused on character voice, sound distinction and the three-dimensional physical muscularity of the body/vocal tract. Students rehearsed monologues from Romeo and Juliet with a plexiglass panel between them or at a distance, while Prof Earley delivered feedback via Zoom. Practice was also recorded for review later on in class. Usually positioned behind-the-scenes when the curtains are up, Diploma in Theatre Production and Management (TPM) students were front-and-centre as they prepared the set for the filming of godeatgod, a play performed by BA(Hons) Acting students and streamed on YouTube. With masks on, they efficiently set up lighting, audio-visual equipment and stage props. TPM student Nurfadhli Jasni was mentored by Brian Gothong Tan, one of Singapore’s leading multimedia artists. Together, they worked on the projections used in godeatgod. 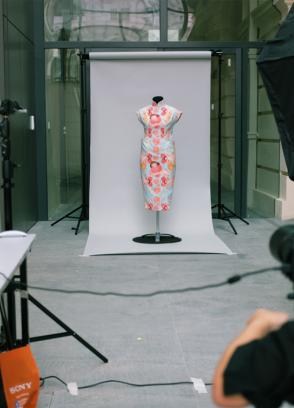