The concept of the creative industries has been paraded by governments around the world as the next economic saviour as countries move from industrial to post-industrial to knowledge and gig economies. With arts and culture instrumentalised as soft power tools for nation building and global influence, the promise of creative talent is something too enticing to ignore.

Professor Justin O’Connor from the School of Creative Industries at the University of South Australia has been researching these issues since 1989. In his time in the sector, he has played a role in shaping creative industry policies in the UK and has advised a number of European city governments, including Sweden, Finland, Portugal, Italy and Russia, on cultural and creative industries strategies. As a guest of LASALLE’s MA Arts and Cultural Leadership Programme, Professor O’Connor shares his thoughts on the creative industries trend in Asia with current MA student Grey Yeoh.

Grey: In your lecture, you discussed China and its industrial policies for culture as well as the example of South Korea's industry pipeline model. These policy models are concerned with the principles of industry, focused on tangible products whereas creativity and culture are intangible and sometimes ephemeral. Can governments and policymakers invest in industry whilst still placating and pacifying artists and cultural workers?

Justin O’Connor: The Chinese and South Korean models take the word ‘industry’ literally. The creative sector is an industry – it makes a product. Their policies are concerned with how products are made, what areas there are to which value can be added, where the gaps are in the market – they take that kind of whole industry analysis into account. This approach is informed by the culture of big corporations in South Korea and Japan, and from state-owned enterprises in China.

This is in contrast to the UK model which presents itself as all about promoting creativity. Ideologically, it was all about the ‘supply’ side of the industry, the creatives and entrepreneurs, with no tools to carry out any industrial policies. Though the British model wouldn’t solely invest in artists and creatives, it would also invest in entrepreneurship, intellectual property commercialisation strategies and all that.

So the question is not so much ‘an industry policy versus a creativity policy’ but what constitutes an industry policy? Do you want to simply produce many units of stuff or focus on the quality of what is produced? We can also question why we produce this stuff? Is it just for shifting products? Or are there some other aspects that we want to take note of? And that’s when an industry policy starts to move back to more of a cultural policy.

This is interesting, especially in the Southeast Asia region, where the arts sector has a resistance to calling their art a ‘product’. The arts, in particular traditional arts, cannot be easily mass produced, nor can their intellectual property be easily commercialised. How can arts practitioners benefit from cultural policies if they resist this underlying framework of industry and commerce?

Many artists don’t like to call themselves an industry. You have to remember that when people started talking about cultural industries in the 1970s or 1980s, it was a kind of a weird peripheral industry. The music industry for example, was run by mavericks. The film industry and Hollywood as well. Economic analysts will say that the structure and the weirdness of these industries has to do with the nature of its commodity. And it’s a commodity based on desire, not need. When you have to make a decision to see ABBA or Elton John, you don’t make a decision based on need or pricing, you go and see the artist you like. You make your comparisons based on desire.

But also, the creation of a cultural commodity demands a lot of labour, a lot of trial and error. What we would call experiment and R&D. (Cultural theorist Theodor) Adorno famously predicted that all artists will be in factories. But even he knew that it wouldn’t work because it makes no sense to have a room full of creatives on a salary. Actually, the R&D processes are carried out by artists in the studio, gallery, attic, small bars and pubs, small homes – work they are doing for free and the development of their skills. How you manage creative labour is also a very distinctive idea. It’s full of weird, creative freelancers working on independent projects, and at some point, it is seen as an ‘industry’. Again we see that the cultural industries are very distinct and different, for lots of complicated reasons.

The flip from the 1980s to the 1990s was that we now saw the rest of the industries behaving much more like the cultural industries. Goods were driven by image, desire and brands as much as they were by utility. The MTV generation, the internet was just coming online to the mass. Nike for example, is a brand machine, not a shoe machine. It sells you the desire. The shoes are made in Vietnam or somewhere, but the industry is the brand, not manufacturing. This was the same time the idea of a creative worker became vogue – suddenly everyone had to be creative, even a worker in a call centre.

Did [arts workers] initially resist this idea of an industry? Yes, they did. But they also came to see it pragmatically. They saw it as a way to get a bit of money from the government. When governments were looking for ways to promote the creative industries, the arts sector put its hand up. The Arts Council of England in the UK bought into it very early on. They saw it as a way to develop the sector. Elsewhere in Australia for instance, the arts community resisted it because they saw it as economics and in principle is antagonistic to the arts. But that has changed as well, as the ‘arts’ is seen as the past, ‘creativity’ is the future. Artists can see the consequence of not getting on board, because in all sorts of different ways they are affected.

I agree that it is an attractive proposition for governments. It also has a very western, modern feel to it. It’s so much that people think this is a good idea, describing it as a next wave of optimisation and development, it’s aspirational. It also claims to be a historical evolution, the wave from the past to the future. The traditional arts you mentioned are in the past and they have to upgrade their act if they want to survive in the future. And this is a very powerful discourse.

In 2008, there was a report by UNCTAD (United Nations Conference on Trade and Development) saying that 52% of all global trade in cultural goods happens within the global south. But if you drill down to the numbers, you’ll see that a large majority of this trade happens between the BRICS (Brazil, Russia, India, China and South Africa) countries. Take them out and it’s really miniscule. Least Developed Countries represent under 1% of the trade. If you look at what counts as cultural goods, it is manufacturing, dominated by China. Cultural services – intangibles, where the real profits lie –  are dominated by the US, Europe, Canada – they control the global corporations and platforms, they own the satellites, cable, TV, radio – they own the IP (intellectual property).

So, it does make me angry when the government of a small African country is told that all they need to do is set up their creative industries and have some entrepreneurship training, and they can enter this market. This is patently untrue! Yet, governments are told and continue to be sold this idea. On one hand, this idea (of creative industries) crushes the local culture, on the other hand, it will fail to deliver. You need to be a very large country with a large population to be able to access the market, countries like South Korea and Japan.

I’d like to dive deeper into the language of policy discourse. We discussed this very briefly – that in a capitalist world, the language employed by policymakers are marked by words like GDP, FDI, job creation, ROI and the likes. We cannot escape this in the arts and culture sectors. For every dollar that we spend, we bring x amount back in. How do we begin to shift this language to one that is about the people, citizens and society?

When I argue that we need to look at cultural values holistically, I get accused of being elitist, that it is an elitist privilege to argue for the inherent value of art and culture.

It’s not about disregarding pragmatic issues but how else can we value art and culture. How do we value culture? How do we evaluate it? Who do we get to value this? Culture cannot be evaluated in a metrical way.

It's happening everywhere else really, the shift of language towards the notion of well-being, quality of life. That’s how people are beginning to talk about it. For example, New Zealand has a ‘well-being budget’. Basically, the idea that with more money, higher income, you can buy more stuff – this idea that consumption and well-being are synonymous is running out of steam and many people are acknowledging it. Increasingly people are talking about quality of life, well-being and arts and culture is part of that. So, it is not difficult (to switch the language), it’s already starting.

Justin O’Connor is a Professor of Cultural Economy at the School of Creative Industries in the University of South Australia. He is also a member of the Global ‘Expert Facility’ programme for UNESCO’s 2005 Convention on Diversity of Cultural Expression. He has been a leading figure in cultural/creative industries policy development, from his work in Manchester, UK, in 1996 and since the early 2000s has been working increasingly on policy developments in East Asia. He has published over 100 books, papers, chapters and reports in the field of cultural and creative industries, arts and cultural policy, urban cultures and popular music. His latest book, Red Creative: Culture and Modernity in China comes out this September 2020. 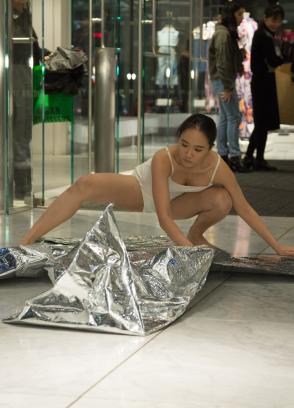 In conversation with: Dr Clare Veal on why there is still much to explore in Asian art histories
See all