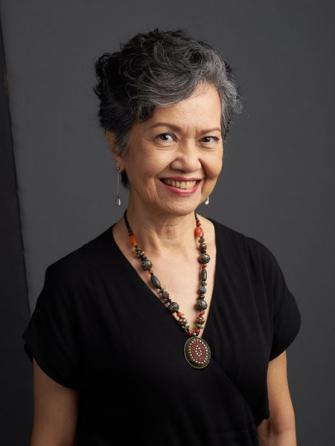 Nora Samosir has been active in theatre since 1979. She has acted with Cake Theatricals, TheatreWorks, Wild Rice, The Necessary Stage, GenerAsia, The Theatre Practice, Teater Ekamatra, Singapore Lyric Opera, Singapore Repertory Theatre and other theatre companies.

Since 2018, she has an ongoing practice research project with Bharatanatyam dancer Dr Nidya Shanthini Manokara as the duo ‘Wandering Women’, based on the lives of Draupadi and Mary Magdalene. They have presented two works-in-progress, Wandering Women – Water in 2018 and Wandering Women: From Kurukshetra to Magdala in 2019.

Her professional career in both education and theatre began in tandem in 1984 as a teacher in a junior college and as an actor in the Singapore Festival of Arts’ production of Bumboat. This double life has since continued with the odd breaks spent overseas - a six-month theatre fellowship in England, a year teaching in Jakarta and a year pursuing a postgraduate diploma in London.

She has taught at primary, secondary, post-secondary and tertiary levels prior to LASALLE at the National Institute of Education from 1998 to 2005 and the National University of Singapore from 2005 to 2020. She has been an actor, director, voice coach and dramaturg.