As a creative arts institution spanning art, design, media, performance, film and music, LASALLE College of the Arts transitioned to partial online teaching in early February 2020 before closing its campuses and going fully online by the end of March 2020. Each discipline required a calibrated way of transiting the curriculum. As the COVID-19 situation worsened, we were reaching the tail-end of the academic year, with only the last two weeks of teaching being delivered fully online, followed by final assessments.

But these normally included almost 200 live performances and recitals, film screenings and exhibitions (the most awaited celebration in the calendar), which now had to be realised through digital means. For us, transition meant that ensemble theatre performances were replaced by individual video showcases of skills, artworks were documented and presented to assessment panels, musicians performed in their bedrooms to backing tracks, and interior and product designers migrated handmade models to 3D renders and animations.

A still from Out of Hand by BA(Hons) Animation Art graduands Elizabeth Teo, Tidaporn Wattanarungsrikajorn and Karanam Niharika

It was not all smooth sailing. Extensive student support included the loan of high-end supercomputers to work from home, and the transition required constant and sometimes dogged one-to-one guidance by tutors on how to manage the change. While uncertainty remained a constant of this period, clear-headed thinking and precise communication were required to assure everyone was on the right track. Perhaps our biggest lesson was that at such times of change and crisis, the most important thing is to ensure all staff-to-staff and staff-to-student directives and communications are well-reasoned, crystal clear and aligned. The dramatic shift from studio to screen-based learning provided three other lessons for LASALLE.

First, the heightened realisation that the highly socialised and embodied arts had to be disentangled from their nerve centre, the studio. This grounded, physical creative space had to be teleported into the virtual. For artists, their studios remain a type of embodiment of themselves and their creativity, and the shift to online engagement, expression and presentation was challenging to say the least. Distancing, whether social or geographical is antithetical to many arts which celebrate the concrete, the physical, the body and the social realm. But now everything was to be expressed in an individuated manner with no physical engagement, while intuitive learning was replaced with more instructive or even didactic approaches.

However, LASALLE’s techno-savvy Gen Z student-artists took to technology-interfaced learning and assessment as fish would to water, and helped the teaching faculty appreciate many potentials they had not considered, acting as mentors. Creative play emerged with small, delightful expressions via WhatsApp, memes and social media alongside assignments. Students began engaging more with artists and designers from around the world as the creative studio became a creative plus space — one infused with digital face-to-face interactivity and drawing on myriad virtual, live-streamed and recording possibilities. The downside to this enthusiasm was that student digital files grew larger than anticipated, sometimes preventing teaching faculty from opening them, or crashing their systems. Secondly, strategies for assessment. Deliberations on the transition of all final assessments to online submission were earmarked by an existential discussion about assessments themselves, their purpose, usefulness, weighting and approach. While initially there was trepidation over how effective and appropriate online submissions might be, in the end, it proved remarkably successful, with high-quality recordings and e-portfolios, partly as a result of good communications, careful support and individual hand-holding. The process also built capacity amongst teaching faculty to be more enterprising in devising online assignments. It is likely there will be much more use of online submissions in future across the arts education sector, and there is an opportunity to reconceive or revolutionise practice-based assessment at an institutional level.

Thirdly, while the flexibilities and opportunities of the digital realm became better understood and embraced, there was an equal realisation that physical and communal public events remain a central, significant and irreplaceable aspect of art. The anti-climactic disappointment of (particularly graduating) students being unable to exhibit art, screen films, or perform music, theatre and dance to live audiences was painful. The Diploma in Dance showreel, filmed prior to the COVID-19 circuit breaker.

The role of arts education institutions in talent-pipelining the cultural and creative industries as well as bringing together communities is fundamentally realised in these public and socialised events, and the importance of direct face-to-face engagement cannot be underscored enough. It catches the energies of creative communities and LASALLE will maintain a clear and fierce commitment to public events that realise this, alongside virtual experiences. It is at the heart of what we do, and while this year’s LASALLE Show exhibition has moved online (with bells and whistles), graduating students have already been asked to return in January 2021 (all being well) when we will stage a major physical exhibition and series of real-space live performances to celebrate their achievements.

Technology and art have often remained respectful neighbours collaborating when a need arises. The virus has brought about brevity forcing the two together. The challenge now is to sustain and nuance this new reality, develop new models melding and getting the best out of both old and new “normals”, and build institutions that embrace a new frontier of 21st century art-making.

In conversation with: Vanessa Ellen Powell on performing in the virtual realm 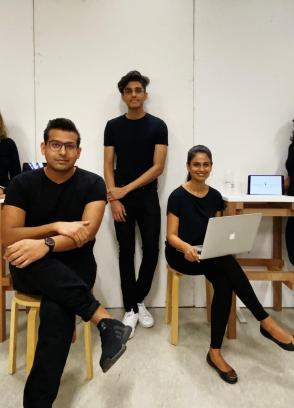